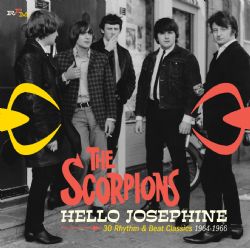 Collectors of 60s UK cover versions might be interested to know that RPM Records have just released a 30 track retrospective on Manchester 60s beat combo, THE SCORPIONS. The band was formed in 1964 and the original members were Peter Lewis, Tony Briley, Mike Delaney and Tony and Joseph Postill. They made a name for themselves on the local scene and even ventured own the famous East Lancs Road to play Liverpool’s celebrated Cavern Club.

At that time the big Mersyebeat bands had become popular in Hamburg and the Scorpions decided that to make it big they needed to do something similar. Instead of opting for the notorious German seaport, though, the band decided to try their luck in Holland and they decamped to Den Bosch. There they quickly became a draw on the club scene and were soon signed to CNR Records who over the next few years released a slew of singles on the band along with four LPs.

This new RPM release cherry picks 30 cuts from those recordings and the album’s full of full-on, 60s style beat covers of then popular US R&B and early soul hits (the standard repertoire of the Merseybeat bands).

So here enjoy rough hewn versions of stuff like Lee Dorsey’s ‘Get Out Of My Life Woman’, Benny Spellman’s ‘Fortune Teller’, Ray Charles’ ‘Sticks And Stones’ and Ben E King’s ‘Ecstasy’. You also get the band’s biggest Dutch hit – a version of Fats Domino’s ‘Hello Josephine’ and a great reworking of Chris Kenner/Wilson Pickett’s ‘Land Of 1,000 Dances’ which the Scorpions renamed ‘The Nana Song’ for the Dutch market.

Over the years – like most bands- the Scorpions went through numerous personnel changes and their story is well told in the liner notes; they still play together, coming together for Dutch tours and festivals and I’m guessing their repertoire hasn’t changed too much since the great days of the 60s.

THE SCORPIONS: Hello Josephine – 30 Rhythm & Beat Classics is out now on RPM Records.