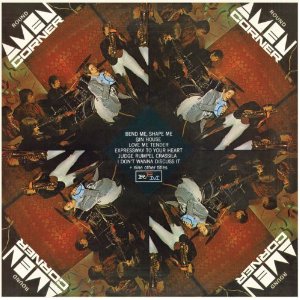 AMEN CORNER came blasting out of South Wales in late 1966. Fronted by the charismatic ANDY FAIRWEATHER-LOW and featuring two horn players, the combo were a cut above your average beat group, proffering, as they did, their own version of American soul and R&B.

RPM Records have just released a wonderful 19 track compilation of all the material they recorded for the Deram label between 1967 and 1968. Three of their biggest hits are included. … a version of NINA SIMONE’S ‘Gin House Blues’, ‘Bend Me, Shape Me’ (originally rerecorded by THE AMERICAN BREED) and ‘Fly High In The Sky’. You also get spirited covers of DARRELL BANK’S ‘Our Love Is In The Pocket’, the SOUL SURVIVORS’ ‘Expressway To Your Heart ‘(an early GAMBLE/HUFF song), LITTLE RICHARD’S ‘I Don’t Want To Discuss It’ and (naturally) THE IMPRESSIONS’ ‘Amen’. There’s also a strange take on ELVIS PRESLEY’S ‘Love Me Tender’ and, being 66/67, some dabblings in phsycedelia.

‘Round Amen Corner – The Complete Deram Recording’ offers an insightful snapshot of mid 60s British-based pop-soul. ANDY FAIRWEATHER-LOW, by the way, still records and tours regularly. His shows are worth catching – full of soul, blues and his quirky humour.