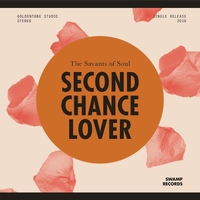 THE SAVANTS OF SOUL are an old school soul show band based in and around Gainesville, Florida. They began as a trio but paying homage to their beloved Motown music they soon realised that more musicians were needed and before too long the Savants were a 10 piece with a debut album, ‘Downtown Sound’.

Since then the band’s line up has been fluid – with something like 22 players passing through their ranks! And now following from the local success of their debut album, the Savants have released a new single… a fine slab of retro soul, ‘Second Chance Lover’.

Musically the tune is a melange of all kinds of soul styles. The rolling brass opening has shades of the classic Chicago soul sound while the tough beats and passionate vocals (Chelsea Oxendine) have their roots in proper southern soul. Add a dash of gospel call and response and a jazzy undertow and you have an intriguing cut… the kind of thing that Eli Paperboy Reed does so well!