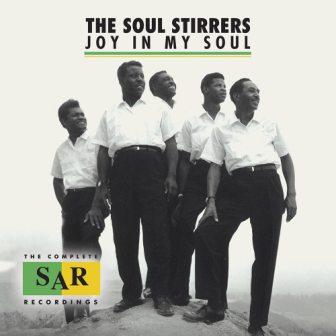 Sam Cooke founded SAR Records in 1961. The great man never actually recorded for his own label (at least nothing that was officially released); rather he saw it as an outlet for his ambitions as a writer and producer and he was keen on bringing on board acts he felt needed greater exposure and a decent deal.

The label ceased to function after Cooke’s sad death in late 1964 and now, just over 50 years since that tragedy, ABKCO Records (in conjunction with Ace Records) are making available some classic SAR archive material.

First up there’s an essential retrospective on gospel legends, THE SOUL STIRRERS. The group have along and garlanded history. Founded way back in 1926, between 1951 and 1957, a young Sam Cooke was the featured lead voice and after he’d he left to follow the secular path, the Soul Stirrers were one of the first acts he brought to SAR.

‘Joy In My Soul’ is a 2 CD, 33 track collection that brings together the best of the Soul Stirrers’ output for SAR and includes four previously unreleased songs. Featured lead singers include Johnnie Taylor (Cooke’s replacement), Jimmie Outler, Paul Foster, S R Cain and James Phelps (some may remember his later Chess hit ‘Love Is A Five Letter Word’). The hand of Sam Cooke can be felt throughout. Many of the songs are his and he handles much of the production too and in places he simply transposes some of his secular work into a gospel setting, as on ‘Lead Me Jesus’ which is a reworking of his ‘Soothe Me’ – recorded by the Simms Twins and later covered by Sam and Dave. The church-honed harmonies are superb; the leads offer passion and commitment and if you know anyone who doubts the obvious link between gospel and soul, get them to grab a copy of this!

The second SAR retrospective features some gospel too…. it’s ‘Lookin’ For a Love’ from the VALENTINOS. The group came to SAR as the Womack Brothers – a gospel group who’d worked with Sam Cooke during his gospel days and Sam was convinced that in Bobby, Curtis, Harry, Friendly and Cecil he’d d found future stars. As the Womack Brothers, they recorded two gospel singles for SAR before Sam convinced Papa Womack (Friendly Snr) that their future lay with the devil’s music. After a reluctant acceptance the boys went on to cut five secular singles for SAR – including the original of the Stones’ ‘It’s All Over Now’ and they’re all included here along with seven previously unreleased tracks.

Both collections come with annotated track listings and essays from leading musicologist Bill Dahl. He gives you everything you need to know and he also recycles many familiar tales – like the one about Bobby Womack’s anger and frustration when he learned that the Rolling Stones had recorded his ‘It’s All Over Now’; the anger and frustration abated, of course, as soon as the royalty cheques came rolling in!