SANBORN AND DUKE – BOXED OFF 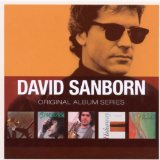 As heralded in SJF back in August, RHINO/WARNER BROS have just issued two superb box sets (well, slip-cased really) on jazz giants GEORGE DUKE and DAVID SANBORN. The sets are part of the label’s fantastic “Original Album” series and each collection houses five classic albums presented with their original artwork.

The five LPs in the GEORGE DUKE set are ‘Snapshot’, ‘Illusions’, Is Love Enough?’, ‘After Hours’ and ‘Cool’ . The albums were recorded between 1998 and 2000 and all reached the US Jazz Chart Top Ten. Check out our exclusive interview with the piano maestro by clicking on our “Interviews” tag up top.

DAVID SANBORN’S album quintet consists of ‘Taking Off’, ‘Sanborn’, ‘Heart To Heart’, Hideaway’ and ‘Voyeur’ – that latter featuring, of course, the sought-after ‘Run For Cover’. Sax man, Sanborn has five Grammys to his credit and these LPs show him at his peak and throughout you’ll hear plenty of his signature sound – gritty attack riding on soul-inspired grooves.

Both sets are out now.