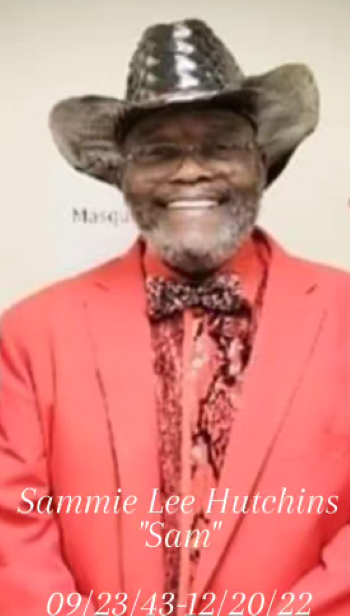 Various soul sites are reporting the recent death of Sammie “Sam” Lee Hutchins, long-time member of veteran vocal group, THE MASQUERADERS. Unsurprisingly, given that the group were never major players, few details are forthcoming. The only information comes via the group’s web site which said: “It is with utmost regret to inform you that our beloved brother, and fellow Masquerader, Sammie “Sam” Lee Hutchins passed away this morning. He was a lead singer for the 1970s Masquerader soul music group for over sixty years. Prior to joining the group, he had a successful solo career. Sam was an amazing musician, singer, and world-renowned performer. We appreciate the love that Sam’s friends and fans have extended to us, the family. Your love, thoughts and prayers are uplifting and encouraging. The services regarding Sam’s final arrangements will be released in the coming days.

The Masqueraders have a lengthy CV. They were formed by Charlie Moore and Robert Tex Wrightsil, in the early 60s in Texas. To seek success the group moved to Detroit and why wouldn’t you? However, they were ignored by Motown but managed to release several singles on the La Beat label. Eventually the Masqueraders pitched up in Memphis where they scored several local hits without really breaking out. Sam Hutchins joined the group in the 70s and was with them during their most productive period when they were signed to the ABC subsidiary label, Hot Buttered Soul. As the name suggests the short-lived label (only 6 LPs were released on it) was a vehicle for Isaac Hayes; ABC creating the imprint for Black Moses after he left Stax in a flurry of law suits. The Masqueraders (who’d just left Hi) were one of his first signings and the album ‘Everybody Wanna Live On’ was the first fruit of the relationship. Check out their lush Isaac Hayes produced version of ‘Baby It’s You’. The group cut a second album with Hayes – ‘Love Anonymous’. This one featured a lovely cut called ‘Modern Day Woman’ and –being released in 1976 – a tribute to America’s bi-centenary independence celebrations , ‘The Bicentennial’.

We believe that Hutchins was working with an incarnation of the Masqueraders until recently. In 2014 Ace Records reissued the group’s ‘Everybody Wanna Live On’ album while more recently Soul 4 Real records reissued some of the band’s back catalogue on vinyl 7”.