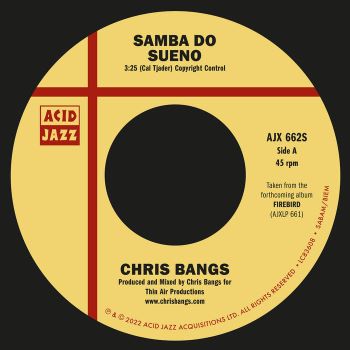 Vibraphonist Cal Tjader’s  1967 ‘Samba Do Sueno’ is a one  of the defining moment in the popularising of Brazilian music outside of its homeland and the lovely, lithe, gentle tune has just been a given a makeover by the UK muso, percussionist and man about music CHRIS BANGS.

We’re pleased to report that “Bangsy” is putting the finishing touches to a whole new album – the official follow up to his collaboration with Mick Talbot, ‘Back To Business’. The new long player is to be called ‘Firebird’ and the cover of ‘Samba Do Sueno’ is the leadoff single. Chris treats the classic with respect  just giving it a 21st century gloss.

The tune’s putative flip side offers a different Brazilian flavour. ‘Soccer Samba’ is a hugely percussive samba school romp… everything’s in the mix – cowbells, whistles, caixas, cuicas, tamborims, triangles, oh, and is that a kitchen sink!!! It’s breathtaking and bodes well for the ‘Firebird’ album , due January 2023.

Both ‘Samba Do Sueno’ and  ‘Soccer Samba’ are good to go now digitally with vinyl on the menu from November 7th . More details – https://acidjazz.bandcamp.com/album/samba-do-sueno-soccer-samba