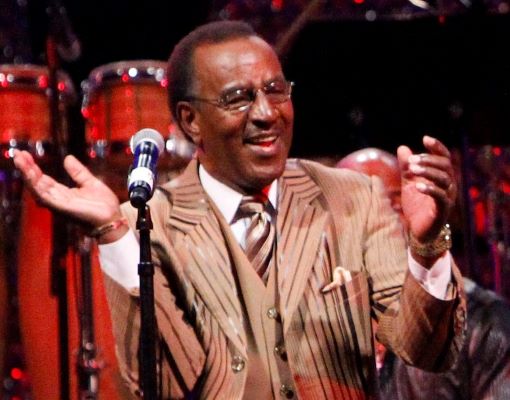 Veteran soul man SAM GOODEN died on Thursday 4th August in his hometown of  Chattanooga, Tennessee. He was aged 87 and his death was announced by his daughter Gina Griffin. Few more details are available, save the Sam passed surrounded by his family.

Sam, who was  born in Chattanooga in 1934, was of course a founder member and mainstay of the Impressions – one of soul’s Premier League vocal groups. It was Sam’s voice that provided the superb harmonic bass back line to the group’s faultless harmonies.

The Impressions date their genesis to 1957 when Gooden (recently arrived in Chicago) joined forces with Jerry Butler and Richard and Arthur Brooks in a group called the Roosters. Butler had his best friend Curtis Mayfield join up and with a name change to the Impressions, they signed to Vee Jay Records and scored a hit right away with the searing ballad, ‘For Your Precious Love’. Butler, who took lead on the song, quit for a solo career and the Impressions all but imploded. Mayfield went on the road as Butler’s guitar player and also sold some of his songs to Chicago publishers. After a year he had enough money to resurrect the group with Fred Cash joining Curtis, Sam and the Brooks Brothers. After a hit with the ethereal ‘Gypsy Woman’, success slowed,  and the Brooks boys quit leaving the Imps as a trio.

And it was as a trio that the Impressions went on to become one of soul’s most successful and enduring groups. The hits and the classics came after the group joined forces with producer and arranger Johnny Pate and their collaborative efforts like ‘It’s All Right’, ‘Amen’, ‘I’m So Proud’, ‘I Need You’, and ‘People Get Ready’ not only  became classics but also helped  define the unique Chicago soul sound. The Impressions, though they never enjoyed a UK hit till 1975, were particular favourites with UK mods in the 60s.

Curtis Mayfield left for a successful solo career in 1970 and Sam and Fred went on to work with a succession of lead singers including Leroy Hutson, Ralph Graham, Reggie Torian, Vandy Hampton and Willie Kitchen. Indeed it was in this period that the group enjoyed that aforementioned UK hit – ‘First Impressions’.

Curtis Mayfield died in 1999 and Gooden’s passing now means that Fred Cash is the only surviving member of the classic line up. The group maybe no more but their legacy and back catalogue is peerless. The ABC and Curtom recordings helped define the sound of the classic soul group while their later work, though often overlooked, yields countless gems. Try to find their 2013 Daptone single which paired a re-recording of the Mayfield-penned/Major Lance hit ‘Rhythm’ with the lovely ‘Starbright’. It’s worth remembering too that for many years Fred and Sam toured with Eric Clapton as his backing singers.

Sam Gooden never sought the spotlight. He was happy to add his bass harmonies to the Impressions’ magical sound, though he did take lead on some album tracks – like ‘I’m Aware Of Love’ and the cover of the standard ‘I Wanna Be Around’. Much later he fronted the track ‘Keep On Tryin”. On stage, Sam also took lead on ‘For Your Precious Love’ reprising the Jerry Butler parts.

Throughout his  60-year career, Sam Gooden achieved much. Along with Curtis and Fred he’s an inductee in the Rock and Roll and Vocal Group halls of fame but he always reckoned that his greatest achievement was to be invited to meet Barack Obama at the White House in 2016. (pictured below). He said it was high point of his long and fruitful career.

The sad passing of Sam Gooden means the passing of a significant part of soul history. RIP.