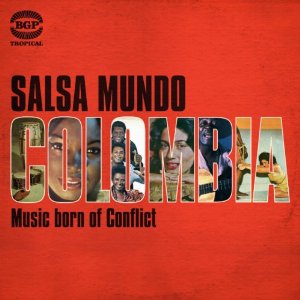 Many broadminded soulsters have a soft spot for Latin sounds and those who have could do worse than checkout the first release in a new series from Ace’s BGP imprint. The series – ‘SALSA MUNDO’ – will look at the evolution of salsa music by focusing on the musical output of a number of countries. The first album in the series looks at Colombia, and more specifically the catalogue of the legendary Fuentes label.

The 18 tracker’s been put together by Latin collector, MIKE DELANIAN and he traces the music’s development from the 60s though to the 70s when the sounds took on a harder edge, reflecting the rising tide of violence that went with the growth of Colombia’s cocaine “industry”.

Colombia’s biggest star, JOE ARROYO, is represented by his ‘Rebellion’ while there’s lots from obscure names like LISANDRO MESSA and COMBO LOS YOGAS. The album comes complete with an explanatory essay from the compiler who has also supplied the evocative album covers which illustrate the notes.

The next releases in the series will explore the music of VENEZUELA and PUERTO RICA.