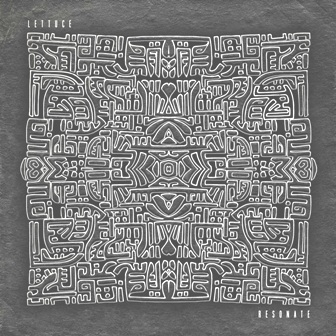 Lettuce is a six piece band – Adam Deitch (drums), Adam Smirnoff (guitar), Erick Coomes (bass), Ryan Zoidis (saxophone), Eric Bloom (trumpet) and Nigel Hall (keys) – who since coming into being back in 1992 as college boys have staunchly fought against being pigeon-holed. They describe their music as “funk/jazz/soul/jam/psychedelic/ hip-hop/art rock/ambient/avant garde/eclectic and experimental!” Take your pick! Their last long player, 2019’s ‘Elevate’ proffered all those flavours… and more besides.  Little wonder it earned the sextet a Grammy nomination in the “best contemporary instrumental album” category.

Lettuce have just issued a new long player, ‘Resonate’, and it takes off where ‘Elevate’ ended… that’s to say it’s been put together using the same cross-genre, intriguing, ambitious ingredients.  Even the cover art echoes the feel of ‘Elevate’.

Hear the unique Lettuce sound at its fiercest on the opener, ‘Blaze’ while on the 8 minute closing title track the players really get to stretch out on an almost cinematic sound sweep. Indrajit Banerjee’s guest sitar offers proper psychedelic shading to ‘Moshka’ while we jet to the Caribbean for ‘Checker Wrecker’ with hybrid toasting/rapping from Jungle Boogie and Big Tony who wriggle and rhyme over a proper rocking, funk chassis. For something a little different keyboardist Nigel Hall takes to the mic on the 70s funk/soul workout that is ‘Remember The Children’.

Eclectic doesn’t really go far enough to describe what Lettuce offer… but if your ears are adventurous you may want to investigate.  ‘Resonate’ is out now digitally with a physical release to follow in July on Round Hill Records.