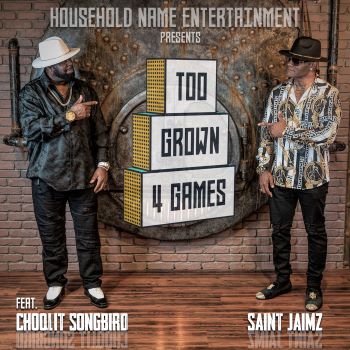 SAINT JAIMZ is the working name of Chicago-born soul man Stanley James Burton. The army veteran now works out of California and his 2009 album ‘Full Circle’ won him plenty of friends. More recently his singles ‘Being Gentle’ and ‘Get Over Your Love’ (from his ‘Intuition’ EP) again gained plenty of plaudits.

The Saint has just issued another EP – a three tracker offering three different mixes of the same song… ‘Too Grown 4 Games’ which features input from Choqlite Songbird. The tune comes in a “video” mix, an R&B mix and the now obligatory Steppers mix. As ever you pays your money! For sure, there’s not a lot to choose between them. The song and production is one of those contemporary soul cuts that’s irritatingly catchy and that’s meant to be a compliment. ‘Too Grown 4 Games’ (in any of the three mixes) is one of those upbeat, Friday night out, get-out-on-the-floor cuts and in these dark days there’s nothing wrong with that. We believe that ‘Too Grown 4 Games’ will also feature on another upcoming Saint Jaimz EP, ‘The RNB Remedy’