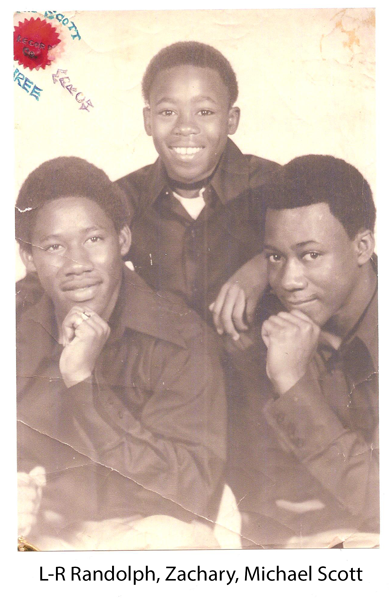 The UK’s SOUL JUNCTION label continues to serve up remarkable archive soul to satisfy the demands of the most discerning soul collectors and the label’s latest vinyl 7″ offering maintains the high quality of the Soul Junction catalogue.

The new disc features an obscure family trio who worked out of Atlanta in the late 60s. THE SCOTT THREE were brothers Randolph, Michael and Zachary and in early 1968 they came to the attention of Atlanta music hustler Thomas “Tee” Fletcher. He’d just penned a song called ‘Running Wild’ and he felt the young (Randolph was 16, Michael 15 and Zachary just 10!) Scotts would be perfect for the tune. The boys duly cut the track (with session players who went on to form Brick) and in March ’68, the Scott Three’s ‘Running Wild’ b/w ‘Gotta Find A New Love’ was issued on the aptly named March label.

Sadly the record bombed but it did get the boys lots of live work in and around Atlanta. Now, as is often the way, the hypnotic ‘Running Wild’ is an in-demand collectors’ item… that demand now being met by the Soul Junction team.

‘Running Wild’ is a remarkable recording… one of those (like say the Astors’ ‘Candy’ or the Esquires’ ‘Get On Up’) that is infectious but you can’t quite say why. It’s quirky and rough round the edges but there are superb family harmonies and a special magic all of its own.

Randolph Scott is the lead singer and he’s out front on the B side too – a sweet ballad ‘Gotta Find A New Love’. Randolph is the only surviving brother and he stills works in the business, managing his two daughters La Tocha and Tamika who enjoyed some success with girl group Xscape. He’s also a minister in his own Gospel church and though his musical message might now be a little different, I’m guessing the soulful sound he offers isn’t a million miles away from the sound on ‘Running Wild’!