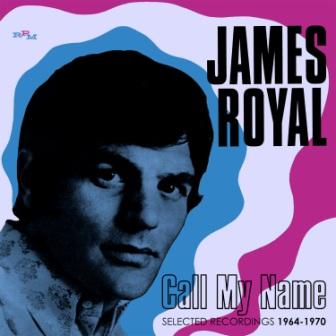 Blue-eyed soul collectors know all about JAMES ROYAL. For those who don’t – a brief bio. Born James Naim in Ealing, West London, James’ first band was an R&B combo, The Skyways. When they imploded he formed his own band – Jimmy Royal and the Hawks who quickly won a large following on the London mod soul and R&B scene. With a little string pulling by Ronnie Woods (yes the Rolling Stone but then in The Birds) and a subtle name change from Jimmy to James the band scored a deal with EMI.

By 1966 the band were “The James Royal Set” but later that year Royal went solo and signed with CBS. Eleven singles and one album followed. His recordings were an eclectic mix of covers and originals and though plenty enjoyed airplay none saw positive chart action so, in 1972 he relocated to Australia with his Aussie wife.

Good music, though, has a habit of resurfacing and in the late 70s “new mod” crate diggers discovered James Royal’s music and over the years a demand for his old stuff has grown and grown… and lo and behold –RPM Records now oblige with a 25 track retrospective of Royal’s work between 1964 and 1970.

The album is named for ‘Call My Name’ – arguably James’ most in-demand song. A moody, soulful item, it was the song that first got fans of mod music digging into James Royal’s back pages. The album also features some tasty Royal covers of soul classics like ‘Work Song’ , ‘Black Cloud’ (an old Jackie Wilson song),Van McCoy’s ‘I’ve Lost You’, ‘I Can’t Stand It’ and a great take on ‘She’s About A Mover’ – Royal’s very first single.