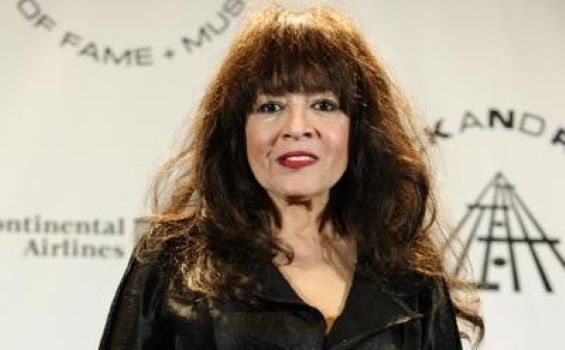 RONNIE SPECTOR, mainstay of the Ronettes, died on Wednesday 12th  January. She was 78. Her official website announced: “Our beloved earth angel, Ronnie, peacefully left this world today after a brief battle with cancer. She was with family and in the arms of her husband, Jonathan. Ronnie lived her life with a twinkle in her eye, a spunky attitude, a wicked sense of humour and a smile on her face. She was filled with love and gratitude. Her joyful sound, playful nature and magical presence will live on in all who knew, heard or saw her.”

Born Veronica Yvette Bennett in New York’s Spanish Harlem in 1943, Ronnie went on to form a vocal group with her older sister Estelle Bennett and cousin Nedra Talley. Originally named the Darling Sisters then Ronnie and the Relatives, they signed to Colpix  Records and changed their name to the Ronettes (Veronica/Ronnie was the group’s lead), the name aping bands like Raelettes, the Ikettes and the Marvelettes. They developed a “bad girl” image – beehive hairdos, tight clothing, short skirts and masses of makeup – a look different to the then prevailing naïve girl  group images of groups like the Shirelles and the Supremes.

In 1963 they signed to Phil Spector’s Philles label. Spector became infatuated with Ronnie and crafted a suite of songs for the group that matched their image… most becoming worldwide hits and oft covered pop standards. Songs like ‘Be My Baby’ (1963), ‘Baby I Love You’ (1963), ‘The Best Part Of Breaking Up’ (1964) and ‘Walking In The Rain’ (1964) have all endured. The Ronettes became hugely popular in the UK and fans of a certain vintage will have fond memories of their Ready Steady Go TV debut – lip syncing in their tight outfits whilst posing on a large swing!

By ’66, the hits started to dry up but Spector pursued his muse, marrying Ronnie in 1968. It’s well documented that the marriage was abusive. Spector kept his wife a virtual prisoner in their Beverly Hills home for years and in her bio, Ronnie recounted her descent into alcoholism, which impacted her professional life. It’s also well told that in 1972 Ronnie’s mother marched her barefooted daughter out of the Spector house . The couple’s divorce was finalized in 1974.

Ronnie Spector then worked as a solo artist, recording sporadically. The Phil Spector link led her to the Beatles’ Apple label where she recorded a now hugely collectable single, ‘Try Some Buy Some’. Penned and produced by George Harrison, Ronnie later described it as “terrible”. She then went on to work with people like Southside Johnny and the Asbury Jukes, Eddie Money and Ramones lead singer Joey Ramone while  Billy Joel penned the single ‘Say Goodbye to Hollywood’ for her. Her second husband and manager Jonathan Greenfield helped renew her reputation as a live performer. Her latter days recordings include ‘She Talks to Rainbows’  a 1999 duet EP with Joey Ramone; ‘English Heart’  a 2016 collection of covers; a 2010 Christmas EP; and the 2017 single ‘Love Power’ produced by Narada Michael Walden.

Ronnie Spector  was inducted into the Rock and Roll Hall of Fame as a member of the Ronettes in 2007. She is survived by adopted sons Donte, Louis and Gary from her marriage to Spector, and sons Austin and Jason from her marriage to Greenfield. Her sister and fellow Ronette Estelle died in 2009.