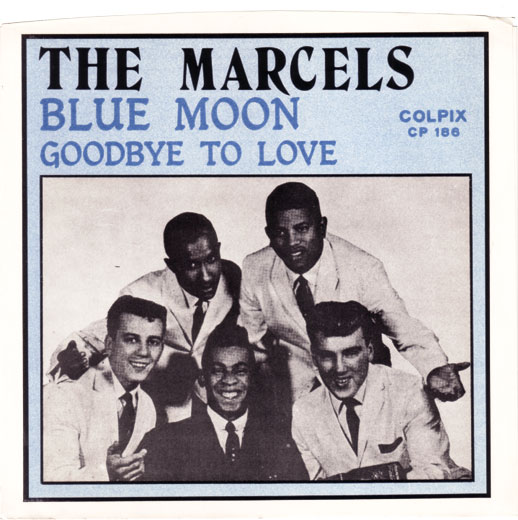 It’s with some sadness that I write about the passing of RONALD “BINGO” MUNDY of the doo-wop group, THE MARCELS. Sad, because their epic recording of Rodgers and Hart’s ‘Blue Moon’ (for all its craziness and eccentricity) has always been one of my favourite records! Sure, “Bingo” who died on Friday, January 20th aged 76 doesn’t get much more than a footnote in soul histories but he helped bring much enjoyment to me and, I’m sure, countless others.

Mr Mundy was born in Pittsburgh in 1940 and along with some school pals he formed the Marcels in 1959, taking their name from a then popular hair style… the “Marcel wave”. In 1961 they signed to Colpix Record and with their bizarre, doo-wop version of ‘Blue Moon’, complete with “bomp baba bomps” and “moon-moon-moon-moon-moon, dip-da-dip-da-dips” they saw immediate chart action. Music legend tells us that the day he heard it, New York DJ Murray the K played ‘Blue Moon’ 26 times in a four-hour show. In March 1961, the song knocked Elvis Presley off the top of the Billboard chart! The same year the Marcels saw more chart action with similar doo-wop versions of ‘Heartaches, ‘Summertime’ and ‘Goodbye to Love.’

However, because the Marcels were a racially mixed group, live work was hard to come by and at the end of ’61 “Bingo” quit the group, eventually finding work as a bus driver. From time to time though he did join Marcel reunions on oldies tours and worked with a group called The Memories. He also sang in the Wesley Centre AME Zion Church choir.

In our picture below, Ronald Mundy is pictured top right.