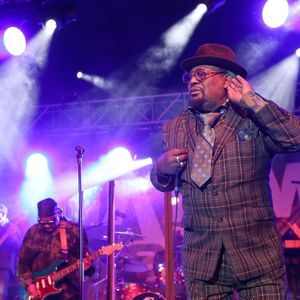 Born in Plainfield, New Jersey, Ford got to know Clinton when George worked in the area as a barber and the pair became close friends. When George moved to Detroit, Ron went with him and as stardom beckoned Ford became a sort of minder/valet/confidant to Clinton. In his biography Clinton states that Ron Ford was one of the few people he really trusted and dubbed him “The Prophet” for his ability to see through people.

Ford wrote with Clinton (notably on ‘Pumping It Up’, which was sampled by the Beastie Boys and Beyonce, and by Marrs on ‘Pump Up The Volume’) and he also sang with various Clinton aggregations.

The pair drifted apart in the 80s and Ford fell on hard times but was eventually helped by Whoopi Goldberg’s 1990 US Comic Relief charity. In recent times Ford worked again with Clinton and together they sued for unpaid royalties. In the last few days George Clinton posted; “Ron Ford had persistence. He hung in there no matter what. He was once homeless with a wife and two kids — he was such a good person.”