ROLLIN’ WITH THOSE PUNCHES… 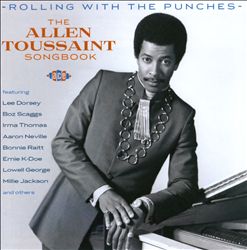 For their latest album in their songwriter series, Ace Records turn the spotlight onto New Orleans’ legend – ALLEN TOUSSAINT. The modest son of the Crescent City is now into the seventh decade of a career that has seen him craft some of America’s most enduring popular songs – and here Ace have collected 24 of the very best. And, like all the albums in the series, to add to the interest, the label has selected versions of those famous songs that aren’t necessarily the best-known. So here, for instance, we’re treated to THE METERS’ version of ‘Ride Your Pony’ and DON COVAY’S take on ‘Everything I Do Gonh Be Funky’.

The set also boasts inclusions from many self-confessed, long-term ALLEN TOUSSAINT fans … people like BOZ SCAGGS, BONNIE RAITT, ROBERT PALMER and WARREN ZEVON. Naturally there’s plenty of music from many of TOUSSAINT’S regular collaborators (including LEE DORSEY, AARON NEVILLE, THE METERS, IRMA THOMAS and BENNY SPELLMAN. As a bonus, there’s even a cut from the man himself – it’s ALLEN’S 1972 ‘Soul Sister’. With other featured artists including BILL MEDLEY, THE POINTER SISTERS, THE JUDDS and MILLIE JACKSON, the long player is a comprehensive portrait of one of black music’s best song smiths.

ROLLING WITH THE PUNCHES – THE ALLEN TOUSSAINT SONGBOOK IS OUT NOW ON ACE RECORDS.