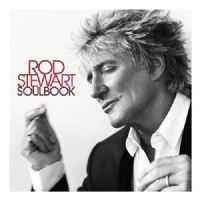 Soul superstars and top session players and singers abound on ROD STEWART’S new album, ‘Soulbook’. For the 15 tracker the veteran Scots rocker returns to the sounds that inspired him in his youth when he was, first part of LONG JOHN BALDRY’S HOOCHIE COOCHIE MEN and then, the legendary STEAMPACKET. Here ROD offers his own takes on songs first made famous by the FOUR TOPS, SAM COOKE, JACKIE WILSON, BROOK BENTON, the TEMPTATIONS and more. To add real soul spice ROD is joined by MARY J BLIGE on ‘You Make Me Feel Brand New’, by SMOKEY ROBINSON on ‘The Tracks Of My Tears’ while on ‘My Cherie Amour’ STEVIE WONDER adds his distinctive harmonica. Amongst the standouts is a take on the JERRY BUTLER/BETTY EVERETT hit ‘Let It Be Me’ with JENNIFER HUDSON recreating BETTY’S part. Two more BUTLER songs – ‘Never Give You Up’ and ‘Only The Strong Survive’ round off the album on which featured players and backing vocalists include RAY PARKER JR, BOB BABBITT, TOM SCOTT, GEORGE BOHANON, CHUCK FINLEY, DEAN PARKS, CHARLES HODGES, WAYNE JACKSON, WILLIE MITCHELL, DARRYL TOOKE, WILL WHEATON, NATHAN EAST, RICKY LAWSON and LYNN FIDMONT. The album’s out now on J Records.