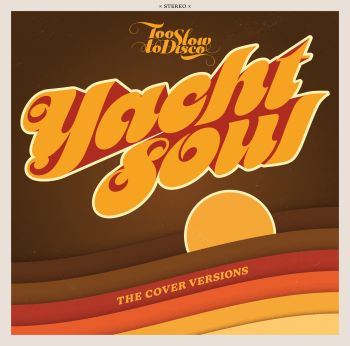 “Yacht Rock” is the new(ish) name for adult oriented rock (AOR) – first popularized on the West Coast (where else?). Easy on the ear and making few listening demands, right now its palette might include soft rock, smooth jazz and sophisticated soul – a soundtrack perfect for whiling away the hours as you cruise the Caribbean sipping on a cocktail of choice surrounded my minions pandering to your every whim!

Whatever… if you wish, you can savour the flavour of yacht rock (cocktail optional!)  via a new 16 song compilation, ‘Yacht Soul’, from the ‘Too Slow To Disco’ team. The album has been put together by veteran crate digger DJ Supermarkt and his brief has been to curate a set of AOR songs that were originally written and/or popularized by Pop/Rock artists but presented here on the album by soul luminaries… and it’s an intriguing listen typified by the opening track, The Main Ingredients’ version of ‘Summer Breeze’. It would have been so easy for Mr Supermarkt to use the better-known Isley Brothers’ version of the Seals and Croft song but choosing the Main Ingredient’s take (from their ‘Euphrates River album) offers a fresh perspective on the original.

It’s a great start to an album that throws up plenty of gems like Dee Dee Bridgewater’s version of Hall and Oates’ ‘She’s Gone’ (titled here, ‘He’s Gone’) and Betty Everett’s reading of the Beach Boys perennial ‘God Only Knows’. Those rarities vie for attention with the better known, like Billy Paul’s cover of McCartney’s ‘Let ‘Em In’ – now well known via a TV lottery ad.

Those doyens of AOR, the Doobie Brothers have three of their songs in ‘Yacht Rocks’ line up. First up is ‘Takin’ It To The Streets’. Enjoy it here in the Quincy Jones version with vocals from a pair of unknowns – Luther Vandross and Gwen Guthrie. The second Doobies’ song is ‘Minute By Minute’ rendered here by Peabo Bryson. The third is Aretha with a soulful treatment of ‘Minute By Minute.’

Amongst the other included artists/songs are The Pointer Sisters with Steely Dan’s ‘Dirty Work’, Millie Jackson’s steamy, 7-minute take on Kenny Loggins’ ‘This Is It’ and Chaka Khan’s transformation of Fleetwood Mac’s ‘Everywhere’. Yep – some big soul names and plenty of great songs – what’s not to like! This is a superior, mainstream soul compilation. Ship Ahoy!