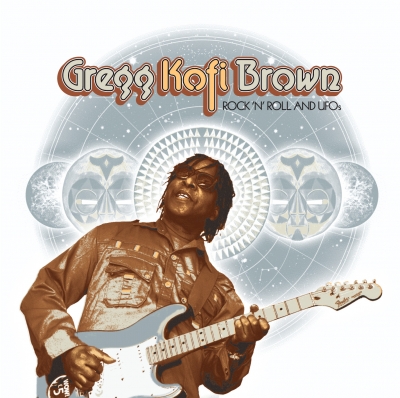 GREGG KOFI BROWN is best known for his work with Afro-soul pioneers Osibisa. Prior to that gig the guitarist/bassist had played with people like Eric Burdon and Joe Cocker till a move to London brought him into Osibisa. He still plays with the band today but also pursues a solo career and his profile is such that his debut set featured cameos from Billy Cobham, Stanley Jordan, Airto, Sting and Gabrielle. Gregg also works on West End shows and more importantly he organized a huge charity concert and single to raise money for the Damiola Taylor Trust.

Living a life more eventful than most (Gregg claims to have encountered UFOs in the Californian desert), our man’s just published his autobiography, ‘Rock n Roll And UFOs’ and, in tandem, Gonzo Multimedia have just issued a similarly-named album that is a 17 track retrospective of Gregg’s work.

The music offers lots of flavours… soul, funk, rock, Afro-beat, dance and pure pop with multinational flavours. We’d point you to the gentle, unplugged ‘Tender Eyes’ and the very different ‘Shadow’ – which gets into classy soulful house territory.