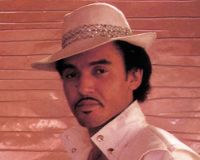 ROBERT ‘SQUIRREL’ LESTER of THE CHI-LITES died on January 22 aged 67. LESTER, who was born in McComb, Mississippi on August 16, 1942, had been in the group for over 40 years and was a founding member. THE CHI-LITES- formed from two doo-wop outfits – had been performing and recording long before their big break through in 1968 with ‘Give It Away’. Then, during the early seventies – led by EUGENE RECORD – the outfit enjoyed a prolonged spell at the top with releases like ‘Oh Girl’ and ‘Have You Seen Her’ becoming long-term pop/soul classics. In the late seventies their label, Brunswick, was beset by financial problems and RECORD quit but LESTER kept the band going and they went on to record for Mercury before calling it a day. Then in 1980 the original foursome – RECORD, LESTER, MARSHALL THOMPSON and RED JONES got back together and pacted with Chi-Sound. Since then the line-up changed regularly and the band drifted from label to label but LESTER remained a constant. MARSHALL THOMPSON, this week, posted the following announcement –
“Today I am mourning the loss of my dear partner and friend, Robert ‘Squirrel’ Lester. He and I have been performing together for the past 50 years and now I am facing the reality that my friend has left me behind. I pray for peace to his family, friends and to each of you. I also ask that you include me in your prayers as I attempt to accept his passing, knowing that after a short illness, he is no longer suffering and has made his final journey. He will remain in my heart and can never be replaced.”