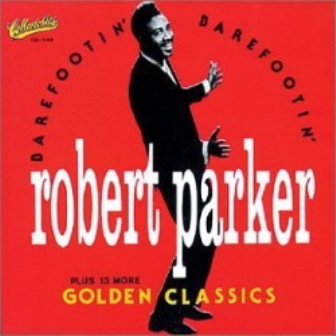 Since its 1966 release it’s been an irresistible call to the dance floor: “Everybody get on your feet… we doin’ a dance that can’t be beat!” The song – ‘Barefootin”; the singer – Robert Parker. Sadly Parker died on Sunday, 19th January in New Orleans. Reports say it was “death from natural causes”. He was 89.

Born in New Orleans in 1930, Robert Parker began his music career as the sax player in Professor Longhair’s band. It’s his sax on the 1949 hit ‘Mardi Gras In New Orleans’. Proud of his city, Robert was happy to work the Crescent City music circuit, regularly collaborating with people like Fats Domino, Irma Thomas, Ernie K-Doe, Frankie Ford and Huey ‘Piano’ Smith. In 1950 he had a local solo hit with the Ron recoding of ‘All Night Long’ – a rockin instrumental. In 1966 he stepped up as a singer and recorded the wonderful ‘Barefootin” for the small Nola label which broke out of New Orleans to become a worldwide smash – covered countless times and still played in clubs and on the oldies radio stations…. and no wonder… it’s totally infectious and always sounds vital! Parker’s only other hit was ‘Tip Toe’ though UK R&B fans have fond memories of his ‘Let’s Go Baby’ and the instrumental ‘Walkin” – two slabs of the classic New Orleans sound. Indeed Parker stayed in New Orleans and though never a big star, he was a mainstay on the local scene performing in clubs right into his 80s… often singing ‘Barefootin” without his shoes and socks! He’s survived by his wife, Carolyn, several children and grandchildren.