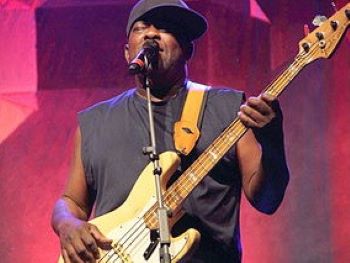 Iconic Jamaican bassist and music producer ROBBIE SHAKESPEARE died on Wednesday 8th December. He was aged 68 and he died in Florida. Reports suggest that Shakespeare had recently been in hospital there for kidney surgery. Jamaica’s Culture Minister Olivia Grange announced his death and said Shakespeare was one of the country’s great musicians. Indeed he was one of a very select few who helped define the sound of classic reggae but, of course, he also worked on non-reggae projects too. Working chiefly with drummer Sly Dunbar – as Sly and Robbie – he collaborated with people as diverse as Madonna, Bob Dylan, No Doubt, Peter Tosh, the Rolling Stones and Grace Jones.

Shakespeare was born in Kingston in 1953 and was taught to play bass by Aston Barrett of The Wailers. In the early 70s  he teamed up with drummer Sly Dunbar playing in the Channel One studio house band and in 1974 the duo broke out on their own as freelance sessioneers and music producers, even forming their own label Taxi Records.

Shakespeare was eventually nominated for 13 Grammy awards and won two – in 1984 for best reggae recording for ‘Anthem’, and then in 1998 for best reggae album for ‘Friends’. Rolling Stone magazine placed him at number 17 on its list of the 50 greatest bassists of all time, saying: “No other musical entity in the post-Marley era has been so omnipresent in shaping the sound of Jamaica and bringing it to the world.”

Jamaica’s Prime Minister Andrew Holness said on Twitter: “When it comes to Reggae bass playing, no one comes close to having the influence of Robbie Shakespeare.”