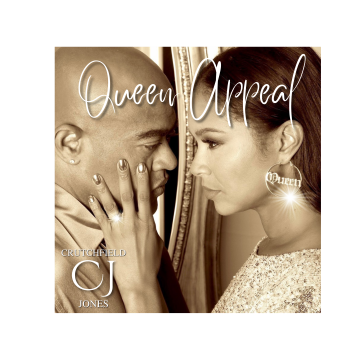 CRUTCHFIELD JONES is a US husband and wife singing duo, Shireen and Ricky. They impressed earlier this year with their  R&B flavoured chugger ‘Crazy Ass’ . We learnt that the couple first met 30 years ago working for Motown. Shireen was part of The Good Girls vocal group while Ricky was lead singer in Yours Truly.

The pair eventually married (different people!!!) and started  families but after two divorces, Shireen and Ricky reconnected and eventually got married and started making music again and that ‘Crazy Ass’ was amongst the first fruits.

The now happy Mr and Mrs follow that up with some sweet and lovely romance… ‘Queen Appeal’. It’s a sensuous affair and a few bars in you’ll recognize that the song is built on in the chassis of Sade’s ‘Your Love Is King’ alongside Babyface’s ‘Whip Appeal’. Sounds odd? Well, maybe, but the result is quite lovely – down to the clever production skills  of Ricky Jones ably assisted by Chad Alexander Wright and Carnell Harrell and the obvious chemistry between the main protagonists, Shireen and Ricky. We look forward to the parent album, ‘The Crutchfield Jones Project’ – due in July!