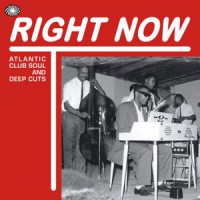 ‘RIGHT NOW’ is a new 86 track, 3CD box set from Fantastic Voyage Records that explores the soul, blues and R&B back catalogue of the mighty Atlantic label.

Atlantic was founded in 1947 by Ahmet Ertegun and Herb Abramson and along with key players like Tom Dowd, Jerry Wexler and Neshui Ertegun (Ahmet’s brother) they built the label into a mighty force in popular music.

This wonderful collection looks at Atlantic’s early years –from its inception through to 1963 and it features all the label’s big names and many key, breakthrough recordings. Featured artists include Ray Charles, The Isley Brothers, Joe Turner, Barbara Lewis, The Coasters, The Clovers, Ben E King, Solomon Burke, King Curtis and Bettye Lavette.

There’s lot of interest too from lesser known names. For instance, the collection features a track from the early Motown sessioneer Choker Campbell (‘Have You Seen My Baby’) and you also get the real, original version of ‘Twist And Shout’. Most music historians claim that the song (made so famous by the Beatles) was first recorded by the Isley Brothers. In fact the Phil Medley/Bert Berns penned song was first recorded by a group called The Top Notes. It was originally titled ‘Shake It Up Baby’ and a very young Phil Spector supervised the session. Berns was disappointed by the version and using the name Bert Russell produced it himself on the Isleys and the rest, of course, is history!

Whatever, enjoy the Top Notes’ version right here and at the same time tune into the original of another 60s beat group staple – ‘Some Other Guy’ by Riche Barrett. The song was covered by almost every 60s group and in fact the first footage of the Beatles (shot at the Cavern) shows them singing this song! Barrett’s original is one of many treasures on this essential archive collection.