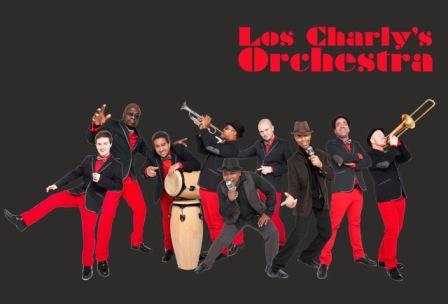 LOS CHARLY’S ORCHESTRA are a London-based music collective created, produced and led by Venezuelan music producers Juan Laya and Jorge Montiel. Their musical inspiration comes from New York’s Spanish Harlem – more specifically the soul based Latin grooves that came from that barrio in the 60s and the 70s… the music of Joe Bataan, Joe Cuba, Willie Colon, Charlie Palmieri and the whole Fania thing.

The music of the LOS CHARLY’S ORCHESTRA is an infectious mix of Latin rhythms and soul and funk grooves and it’s won them a residency at London prestigious Floridita Club while back in 2009 they won the accolade of having one of their songs included on that year’s Soul Togetherness compilation. Live, the collective have played all over the world – from Shanghai to Ibiza!

The band are about to unleash their latest long player – ‘Rediscovering The Big Apple’ and they’ll be officially launching it at their gig at Floridita on November 2nd. The club’s on the site of the old Marquee Club on Wardour Street in the heart of Soho. The band will play between 8pm and 10 pm and you can find out more by ringing 020 7314 4000 or @ www.floriditalondon.com