RIGHT BY YOUR SIDE 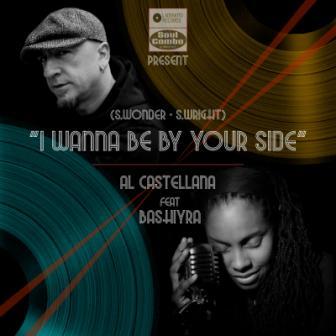 Back in 2013 Italian soul man AL CASTELLANA impressed many with his ‘Outside My Window’ long player. It boasted a beautiful Philly style retro ballad called ‘Lucky Man’ and a great cover of Stevie Wonder’s ‘Superwoman’.

Big Al clearly has a thing about Stevie, ‘cos his brand new single is a tune from the great man’s illustrious back catalogue… a little known gem called ‘I Wanna Be By Your Side’. Wonder buffs will know the song first appeared on his then wife’s Syreeta’s 1974 debut album, ‘Stevie Wonder Presents Syreeta’. It’s a languid, building ballad and on the original Ms Wright duetted beautifully with G C Cameron.

Al’s new version keeps the duet format. His singing partner is up and coming UK soulstress Bashiyra and between them they do a great job – repeating all the passion of the original while producer Daniele Dibiaggio pulls of an authentic 70s style sound complete with full but subtle instrumentation.

The tune will be available on all digital formats via Lademoto Records from March 16th. Al’s new album, by the way is slated in for June release.