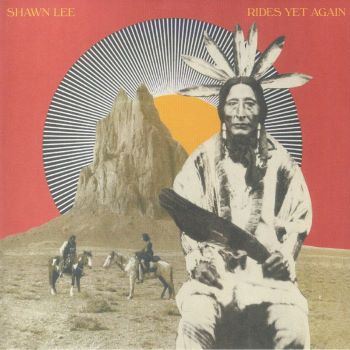 SHAWN LEE is a proper music multitasker. In a long career, the  London-based, Wichita-born artist/multi-instrumentalist has made a name for himself as a producer and an award-winning video game, TV and film composer. Of mixed ancestry (his mother enjoys Lebanese and American Indian ancestry and his father is Irish American) he’s recorded solo and as a member of various bands across different genres. Amongst his various recorded incarnations are Shawn Lee’s Ping Pong Orchestra and Young Gun Silver Fox (a collaboration with Andy Platts of Mamas Gun).

In 2019 he released the album ‘Rides Again’ –  his first vocal/songwriter solo set since 2005’s ‘Harmonium’ and he described it as “a personal journey into the world of soul-inspired country music”.

Three years down the line (pandemic, lockdowns and all that) he follows up with ‘Rides Yet Again’. Shawn  explains the ethos of the album: “When the original pandemic lockdown of 2020 ascended upon the world, I found myself like many others a prisoner in my own home. I began thinking about making new music. What do I wanna do I pondered… ‘Rides Again’ was a personal once in a lifetime album or was it? After some reflection, I realised there was more to this story, this sound. As I eventually crept back to my studio ducking and diving all the way, I started writing and recording new songs for Rides YET Again.” So, you won’t be surprised to learn that the soundscape of ‘Yet’ is similar to the original ‘Ride’ … overriding flavours are modern country music and Americana with a blue-eyed soul undertow.

There are though some subtle differences. The lyrics are more introspective. Shawn explains: “The lyrics heavily informed by life during lockdown, my new dog Carla and my recent health problems. I had suffered a stroke which left me with some brain damage and I struggled with Aphasia for well over a year with extremely impaired speech. It was hard … I found solace in song and a musical context to share my ups and downs. It was a beautiful place to retreat to”.

And the orchestration, in places, is fuller, lusher. Shawn again: “John Pickup brought his brilliant orchestral treatments. Also Nichol Thomson, Tom Walsh, Mike Davis & Andy Ross blessed me with their sublime horn stylings. Suffice to say I’m really quite fond of this little record.” Indeed there’s a lot to be fond of here – try the soul-flavoured upbeat, ‘Heaven On Eleven’ , the country-tinged ‘Manuka Honey’ or the folksy ‘Airplanes’ Like all the 11,  songs they’re crafted with love by a man who thinks deeply about his music. ‘Shawn Lee Rides Yet Again’ is very different  to our man’s  Young Gun Silver Fox work but it has its own special magic… flavours of Glen Campbell, Jimmy Webb, and Neil Young – even Brian Wilson. Eclectic and enjoyable. Out now!