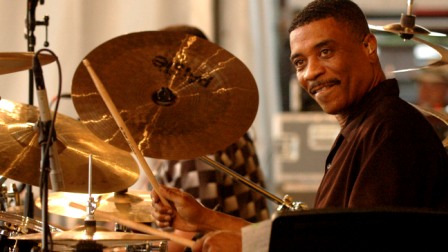 Jazz and session drummer RICKY LAWSON died on 23rd December at the Long Beach Medical Centre, California. He was just 59.

The founding member of the Yellowjackets was born in Detroit in 1954 and began playing drums in his teens…his uncle, the famed Motown musician and arranger Paul Riser, buying him his first kit. By the 1980s Lawson had become an in-demand session player – featuring on records by people like Michael Jackson, Phil Collins, Stevie Wonder, Eric Clapton, Al Jarreau, George Benson, Quincy Jones and Whitney Houston. Lawson won a Grammy award in 1986 for best R&B instrumental performance for the tune ‘And You Know That’ by his group, Yellowjackets.

In 2001, Lawson released a solo album ‘Ricky Lawson and Friends’ on which he performed, arranged, produced, and wrote all of the songs in collaboration with, amongst others – Gerald Albright, Phil Collins, George Duke, Sheila E., Nathan East, Donald Fagen and Kirk Whalum. In 2008, Lawson released a Christmas CD, ‘Christmas with Friends’.

Ricky was recently diagnosed with a brain aneurysm and reports say that he became disoriented whilst performing at the Spaghetti jazz club in Seal Beach, California during December. He was admitted to the Long Beach Memorial Medical Centre in California, where he passed away on the 23rd of December. Ricky was removed from a life support machine following a period of ten days and a hospital spokesperson stated Ricky’s organs were donated for possible transplant to others at his request.