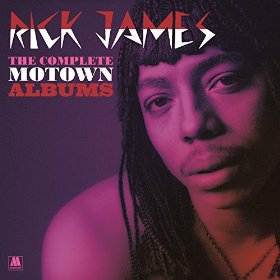 Ten years after his premature death at the age of 56, the extraordinary larger-than-life wild man of soul and funk, RICK JAMES, is honoured by Motown – the label he was with from 1978-1986 – via the digital release of his complete back catalogue for the company. Available from today, July 8th, the flagship download release is a digital collection titled ‘The Complete Motown Albums,’ a mammoth 109-track set that features nine complete albums (beginning with 1978’s ‘Come Get It’ and ending with ’86’s ‘The Flag’) and which is bolstered with a raft of exclusive bonus tracks. These include collectable 12-inch mixes as well as the three albums that James helmed for the Stone City Band, plus an album each from his protégés Bobby M and Val Young. Also appended to the set is the very rare eponymous debut LP by White Cane, a band that James led prior to his Motown success in the early ’70s.

Five of James’ nine Motown albums are also available separately in digital form with bonus material – among them the ’80s long players ‘Cold Blooded‘ and ‘The Glow,’ which have never been reissued before.

Rhino has also announced that they will be reissuing James’ 1988 Reprise album, ‘Wonderful,’ as well as releasing for the first time its follow-up, a lost LP called ‘Kickin’,’ which was recorded in 1989 but later canned.

The revival of James’ back catalogue in the USA coincides with ‘Glow,’ a new autobiography from acclaimed writer, David Ritz, which will available on July 18th via Atria Books/Simon & Schuster.