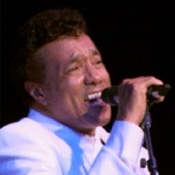 Less than two weeks after the death of one time TEMPTATION, DAMON HARRIS, it’s been announced that another sometime member of the legendary band – RICHARD STREET – has died.

Sources in the States say that STREET died in a Las Vegas hospital on Wednesday 27th February. He was 70. His widow, CINDY, confirmed that her husband had suffered a pulmonary embolism whilst in hospital. He had been admitted to the St Rose Dominican Hospital last Friday after reporting trouble breathing. The singer had had a history of blood clotting.

RICHARD STREET was born in Detroit in 1942 and as a youngster aspired to an athletic career but in his late teens he turned to music joining a band called THE DISTANTS that also featured future TEMPTATIONS mainstays OTIS WILLIAMS and MELVIN FRANKLIN. After THE DISTANTS had disbanded STREET formed the MONITORS who were signed to Motown but they never became major players in the Gordy Empire. Whilst with THE MONITORS, Motown iconography tells us that he coached THE SUPREMES in vocal styling; he also married VELVELETTES lead singer, CAROLYN GILL, in 1969 (the marriage lasted till 1983) and eventually worked for the Motown Quality Control team.

RICHARD was drafted into THE TEMPTATIONS after the departure of EDDIE KENDRICKS and PAUL WILLIAMS – joining the sadly recently deceased DAMON HARRIS in the new line up. He stayed with the group till 1993 and was featured on classics like ‘Papa Was A Rolling Stone’ and ‘Masterpiece’. After leaving THE TEMPTATIONS, STREET worked with a number of different TEMPTATIONS review style shows which featured various ex-members of the group and only last year he’d completed an arduous tour throughout Europe.

RICHARD STREET is on the left of our picture. (DAMON HARRIS is on the right)