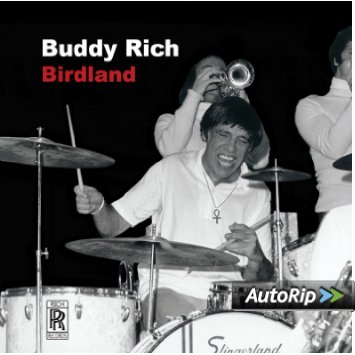 Always good to have new material on doyen of drummers BUDDY RICH and all the cuts on the just released ‘Birdland’ set have never been issued anywhere before. The 11 tracker is actually a live album with a somewhat chequered history. The recordings were made by reeds man Alan Gauvin who played in the Buddy Rich Band between 1976 and 1980. He wanted to hear himself playing with the band and so got Buddy’s permission to set up a primitive Sony tape recorder at a number of gigs. Gauvin never meant the tapes to be issued and he’s the first to admit that what he captured was less than sonically perfect. However with the agreement of the Rich estate and some audio magic from engineer Tom Swift, the music’s now available as ‘Birdland’ on Lobitos Creek Records.

The recordings catch Rich at the peak of his powers and his big band (5 saxes, 4 trumpets and three trombones) has never sounded so impressive. Tracks range from jazz standards like Billie Holiday’s ‘God Bless The Child’ and John Coltrane’s ‘Moments Notice’ through to contemporary pop classics like Paul Simon’s ‘Keep The Customer Satisfied’. Undoubted highlight though is the seven minute plus title track…. The Joe Zawinul tune swings like it never swung before and keen eyed movie goers will have noticed the track’s prominence in the Oscar nominated movie ‘Whiplash’.

Buddy Rich’s ‘Birdland’ is out now on CD and digitally and a vinyl version will be released in June.