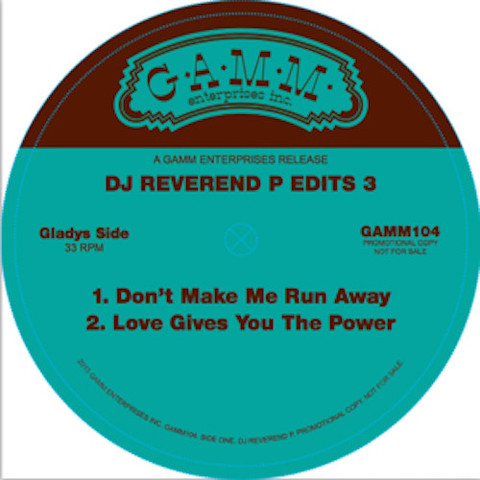 Obscure soul seekers might well know all about French mix meister DJ REVEREND P. That clerical moniker is the alter ego of veteran Parisian muso PATRICE LARRAR who for years now has been playing out in the City Of Light where his Motown soul parties became the stuff of French soul legend.

Anyway, to make his Motown nights go with a real swing, the Reverend DJ took to the mixing desk and many of his soul and Motown re-workings have long been in demand by soul collectors. Now it seems that his label GAMM has entered into a deal with Sony/Legacy to release a selection of the Reverend’s mixes….

We’re told that there are three volumes of mixes in the pipeline…. covering soul, funk and disco and the tunes that have been leaked out reveal a sympathetic mixer much in the mould of Tom Moulton. That’s to say someone who knows and respects the original music and refuses to take too many liberties with it. Simply all that the Rev does is (like Moulton) find the best breaks, the catchiest hooks and emphasises and extends them. Sounds simple doesn’t it?

Diligent internet searching should lead you to the man’s mixes of Gladys Knight’s ‘Love Gives You The Power’ and ‘Don’t Make Me Run Away’ along with George Duke’s ‘Say That You Will’ and ‘Party Down’.