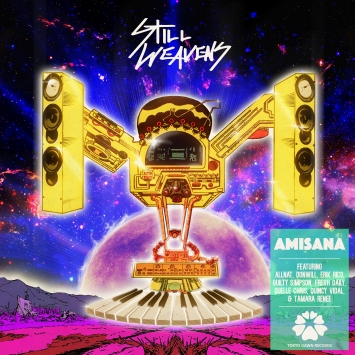 New York muso STILL WEAVENS is hard to pin down. He describes himself as a “beat head” whose musical roots are in “R&B, Hip Hop, Jazz, Rock, and Dance music”. He says that the music he makes is a fusion of “retro sounds and futurism” and after years of underground instrumental singles he’s just released his first full length album…..’Amisana’. Helping him deliver his sound are people like Guilty Simpson, Donwill, Tanya Morgan, Fresh Daily, Quelle Chris, Quincy Vidal and AllNat. Between them they add eclectic vocals (some of it vocoded) and laid back rapping.

Released on Tokyo Dawn Records, ‘Amisana’ is a concept album about a cross-nebula planet (the Amisana of the title) which faces similar environmental, social and political problems to our own Earth. The soundtrack on the planet is spaced out, electro funk….. here a touch of Prince, there a garnish of Clinton and an awful lot more. You get the picture.

If you want to journey across the cosmos and sample the funky space opera that is ‘Amisana’, the usual download platforms will stamp your ticket!