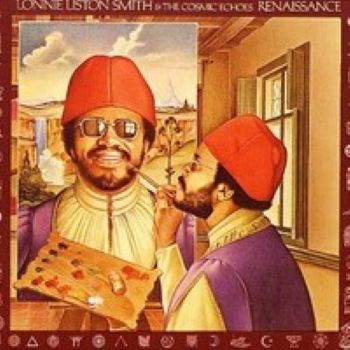 Ace Records, via their BGP subsidiary, continue their thoughtful curatorship of the Flying Dutchman catalogue with the reissue  of ‘RENAISSANCE’ by LONNIE LISTON SMITH and the COSMIC ECHOES.

The 1976 seven track album, which was actually released on RCA,  was Smith’s last album for the Bob Thiele set up and some critics describe it as  the bridge between his jazzier, “cosmic” work and the more commercial music he later recorded for Columbia.

The tracks ‘Space Lady’ and Mongotee’ are typical of Smith’s mid 70s sound , though the album standout is the Brazilian flavoured ‘Mardi Gras (Carnival)’ which, over the years has become something of a jazz dance staple.  The album’s title track features Lonnie’s brother Donald on vocals.

Critical opinion has  long been divided about this album’s merits – equally some critics have derided the album artwork as pretentious – portraying the keyboardist as an Italian Renaissance painter. You can investigate for yourselves – the reissue is out now via Ace/BGP.