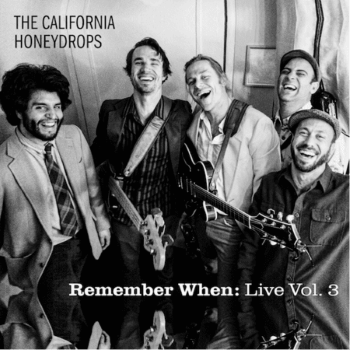 Co-founded by Lech Wierzynski   and Ben Malament in Oakland just over a decade ago, the CALIFORNIA HONEYDROPS have built up a strong and steady fan base for their  quirky cocktail mix of  Bay Area R&B, funk, Southern soul, Delta blues, and New Orleans second-line – all delivered with an honest enthusiasm and a  garnish of humour as befits their roots as street buskers!

Earlier this year the Honeydrops became quite an internet sensation when their version of ‘Under The Boardwalk’ chalked up over 2 million internet video streams!

The band’s latest offering is another quirky confection… a live album, ‘Remember When Volume 3’.  The 8-track album is a compilation of recordings from live concerts nationwide ranging from shows in Portland to the band’s most recent live show at the Mission Ballroom in Denver on January 17, 2020. Wierzynski says: “Each one of these tracks has something special, something we did that night and that night only. Whether it’s a spontaneous crowd interaction, or and an ad-libbed verse or a little background vocal riff we came up with on the spot. You can hear us leaving the script and the show behind and diving into the spirit of that night, searching and finding the lil’ nuggets that make each night of live music with an interactive audience so special. Listening back to these tracks during quarantine, it’s hard to imagine that we even made these sounds. There’s so much energy and joy it almost seems alien during these weird times.”

Hear all that spontaneity and surprise on a remarkable nine-and-a-half-minute version of Hugh Masekela/Friends of Distinction’ ‘Grazin’ in the Grass’… it is indeed a GAS! Amongst the other tunes are ’Have You Ever Seen The Rain’ and ‘Rivers Invitation’ – all wildly atmospheric and energetic. Interestingly, the band are currently streaming live shows every Friday night – with portions of any profit going to different charities. You can learn more about the album and the streams @ www.cahoneydrops.com