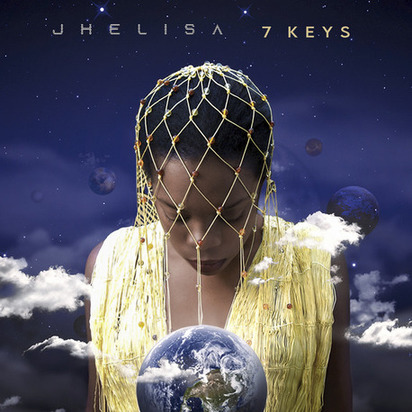 Jhelisa Anderson made one of the best soul records of the 1990s in the shape of ‘Friendly Pressure,’  which has to date accrued over three million streams on Spotify. An acid jazz-tinged groove ballad, the track was the killer cut from the US singer’s debut album, 1994’s ‘Galactica Rush,’ released on the Dorado label. Jhelisa made a second LP for the company in 1997 and then fell off the radar for a few years before returning in 2006 with ‘A Primitive Guide To Being There.’

Fast forward sixteen years and Jhelisa is now back with her fourth long-player. It’s a double concept album called ‘7 Keys Volumes 1 and 2’ and is very different from what she’s done before.  There’s always been a cosmic vibe to the Mississippi singer/songwriter’s music but on her new project, she creates immersive spiritual soundscapes whose inspiration is ancient eastern droning noises which she’s contemporised and framed with New Age sounds. The seven keys in the album’s title refer to the human body’s seven chakras (or energy centres) and the unique musical pitch or frequency assigned to each of them. The resulting music is serene and meditative but a long way from her earlier, more commercial, work.

Explaining the concept behind the album, Jhelisa says: “I believe in using frequency consciously, not letting it use you. I became more aware of the effects of shifting frequencies on my biosystem and mental state, which led me to gain more control over it. Using the 7 Keys concept to tune myself each day in my own way, using the technology of yoga and meditation to get more clarity and balance, I have more control over frequency and harmonic output and input. After all these years of making music, the concept of harmony and rhythm has a whole new meaning! It’s exciting to return to Dorado and work with Ollie again as he already knew the benefits of this technology and gets it, it made sense for us to present 7 Keys and its conscious listening vibes to the people. People be stressed these days and I hope this helps soothe the chaos just a little bit.”

Jhelisa’s ‘7 Keys V1 and V2’ is released digitally via Dorado on October 8th.