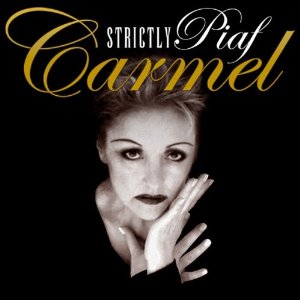 In the 80s CARMEL McCOURT fronted a successful three piece band identified simply by her Christian name. Based in her home town of Manchester, CARMEL enjoyed three sizeable UK chart hits while their albums garnered both good reviews and decent sales figures. The band had a distinctive sound that used CARMEL’S soulful voice to best effect. CARMEL also enjoyed success outside the UK – most notably in France where the cool, atmospheric vibe they created struck a chord with French audiences. Indeed Ms McCOURT went on to have a big hit in France with ‘J’oublierai Ton Nom’ – a duet with France’s top pop star JOHNNY HALLYDAY… a performance that had French critics making comparisons with the legendary EDITH PIAF.

In the 90s the band effectively split up but during the new millennium McCOURT and bassist JIM PARRIS were back together – touring and occasionally recording material –some of it provided by poet SONIA HUGHES. Now, at last – some 17 years since their last full album – CARMEL have released a new long player and given the back story, it’s no surprise that the album is a tribute to EDITH PIAF

The ten track ‘Strictly Piaf’ is heartfelt homage to the Parisian icon – but the music here is not a straight copy or even a pastiche. Knowing that tackling the work of PIAF would never be an easy task, CARMEL transforms well known songs like ‘Sous le Ciel De Paris’, ‘La Vie En Rose’ and, yes, ‘Non Je Ne Regrette Rien’ into her own form. The recordings are elegant and, in places, chilled enough to satisfy the Café Del Mar crowd. All tracks are full of respectful energy yet they manage to retain the forlorn sprit of PIAF. Sung in both English and French, the songs look back to a great performer and celebrate the work of an innovative interpreter.