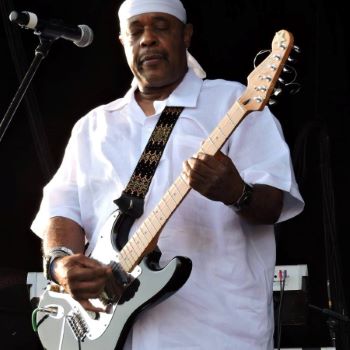 US sources are reporting the death of REGI HARGIS, co-founder and guitarist of funk band, Brick. Regi died on Fraidy 15th October.

The Brick Facebook page posted: “It is with tremendous sadness that we confirm the passing of the founding member of the band BRICK family and a musical legend in our midst. Regi Hargis, one of the original members of the Band Brick, passed away 10-15-21 at his home in Atlanta. We have been honoured and privileged to share the love of music, friends, travel, adversity and triumph with this kind spirit and musical dynamo. Regi has been instrumental in numerous hits since the inception of the group in 1976 and his passing as an artist and musical family member will forever be missed. We ask at this time for your prayers for his always supportive and loving family, and ask that you hold his family in prayer as they adjust to his loss and mourn his passing. Regi Hargis will remain in the minds and hearts of the many that he has touched through sight, sound and spirit. REGI WE’LL MISS YOU!”

Hargis helped found Brick in the mid 70 in Atlanta – the original line up was a combination of a jazz group and a disco band and so they called their sound “DAZZ”. Consequently ‘Dazz’ became one of their best known songs. Their other hits included ‘That’s ‘s What It’s All About’ and ‘Ain’t Gonna Hurt Nobody’. Their last his was  ‘Sweat (Til You Get Wet)’ in 1981.