REEL PEOPLE … FOR SURE 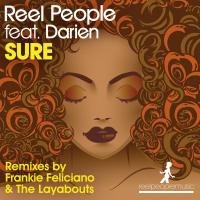 REEL PEOPLE debuted in 2003 with their wonderful album ‘Second Guess’. Featuring guest likes ANGELA JOHNSON and DYANNA FEARON, cuts like ‘Can’t Stop It’ quickly became underground soul classics. The album was reissued in 2005 by Defected Records and two years later the band unleashed their second long player – ‘Seven Ways To Wonder’. From that set the TONY MOMRELLE vocalized ‘Amazing’ became an instant modern soul hit while ‘Alibi’ – which featured the vocals of New Yorker DARIEN (DEAN) – followed it into the affections of the cognoscenti.

The good news is that REEL PEOPLE have reenlisted the talents of DARIEN for their brand new single – ‘Sure’. The song is a welcome slice of summer sun in a drab winter and bubbles with Latin guitars, percussive beats and a delicious nu-soul vocal from the native New Yorker and we’re told that mixes from FRANKIE FELICIANO and THE LAYABOUTS have already enlivened the Christmas club scene. ‘Sure’ is the lead single from REEL PEOPLE’S upcoming album, ‘Golden Lady’ which features more collaborations from Mr. MOMRELLE and the wonderfully named RESTLESS SOUL FUN BAND.

‘Sure’ will be released on Traxsource Promo on January 12th, with a full release on Reel People Music on February 3rd.