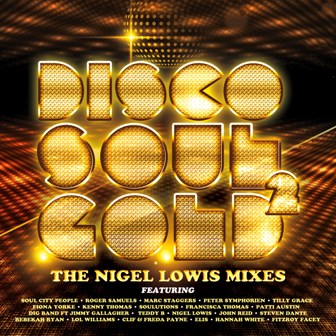 The Disco Soul Gold network is the brain child of soul entrepreneur GARY VAN DEN BUSSCHE. He’s been in this crazy soul biz for more years than he cares to remember… handling top line PR, DJ-ing, compering, hosting radio shows, running big club nights, maintaining soul blogs and web sites and, of course, heading up his own labels… the first being Wizz Records back in the 90s.

Six years back Gary started a new label – DSG and, often working with Nigel Lowis, the label has scored soul hit after soul hit as well as breaking plenty of “names” – most notably Soulutions. Back in 2017, DSG issued their first compilation album – it was an immediate success, topping the UK soul chart for 8 weeks! Hardly surprising since the DSG team seem to have the knack of tapping into the current trend for “modern retro” sounds which Gary describes as “the sound of yesterday with a taste of today”.

Well, it’s taken something like 18 months, but DSG are all set to release their second compilation….. Imaginatively titled ‘DSG Volume 2’! It’s a 19 track set and all the indications are that it will emulate volume 1 and top all those credible soul charts!

The overriding soundscape of ‘DSG Volume 2’ is that irresistible “sound of yesterday with a taste of today” with many of the tracks echoing the great sounds of Philadelphia in the 70s and 80s. Hardly surprising seeing as the mixes re down to Brixton boy Nigel Lowis who makes no secret of his love of the music of the city of Brotherly Love.

That said there is plenty of variety. For instance Hannah White’s ‘Tell Me’ channels the uptown/Bacharach sound of the 60s while the closing ‘This Ever Changing World’ (Peter Symphorien and Fitzroy Facey) seems to take inspiration from the psycho soul of Norman Whitfield.

Many of the tracks here will already be familiar to soul lovers – things like Soulutions’ ‘Philly Line’ (though this inclusion is a fresh mix) and Patti Austin’s ‘Hope Has Arrived’ but there’s plenty of great new stuff too like Francisca Thomas’ ‘Clouds In My Mirror’ and hubby Kenny’s lovely ‘Back On Broadway’. There’s even a track from Nigel Lowis as an artist – the George Benson-esque ‘When The Night Calls’ (he gets a little help from Tilly Grace here, by the way!)

Another of the highlights is the collective effort that is ‘The Soul City People’ from -Peter Symporien, Marc Staggers, Roger Samuels (fresh from The Voice), Hannah White, Jimmy Gallagher and Nigel Lowis  … “the Soul City People”!

‘DSG Volume 2’ will be “launched” at a very special soul cruise along the Thames on Sunday April 28th. I think the event is sold out… and the album is sure to be a fast seller too. Don’t miss out!