READY TO ROCK! NEW RANDY BRECKER ALBUM OUT NEXT MONTH 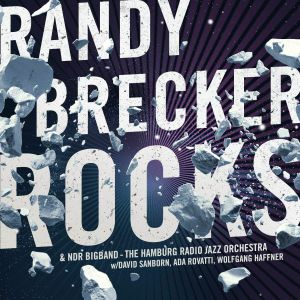 Throughout his long career, US horn maestro, the redoubtable RANDY BRECKER, has played with the best of the best. As a sideman, his burnished trumpet has appeared on records by jazz legends Horace Silver and Art Blakey as well as lighting up tracks by funk bands (Parliament-Funkadelic), singer-songwriters (James Taylor), pop divas (Bette Midler), and rock acts (Frank Zappa, Todd Rundgren, and Dire Straits). As well as being a charter member (alongside his late brother, tenor saxophonist Michael Brecker) of the legendary ’70s jazz-funk outfit, the Brecker Brothers, Randy has also enjoyed an illustrious solo career (he recorded his Duke Pearson-helmed debut album, ‘Score,’ in 1969 for the Solid State label).

Now 73 but still going strong, he is set to unleash a new long player called ‘Rocks’ on February 22nd 2019 via the Jazzline label. What distinguishes this latest opus from previous releases by the veteran trumpeter is the formidable presence of the NDR Big Band, who along with arranger Jörg Achim Keller helped Becker to create widescreen versions of some of his most popular tunes in the recording studio.

The album was cut in Hamburg and includes musical support from Brecker’s wife, saxophonist Ada Rovatti – who shines on three cuts – plus sterling support by the trumpeter’s old sparring partner and former Brecker Brothers Band member, alto saxophonist, David Sanborn, who guests on a trio of tunes.

‘Rocks’ begins strongly with a turbo-charged reconfiguration of ‘First Tune Of The Set,’ a muscular funk groove which originally appeared on the 2013 album, ‘The Brecker Brothers Band Reunion.’ Also from that album and featured on the new set are the subdued and delicate ‘Adina’ and the blithe soul-jazz cooker, ‘Dipshit.’

For more info go to: http://randybrecker.com/