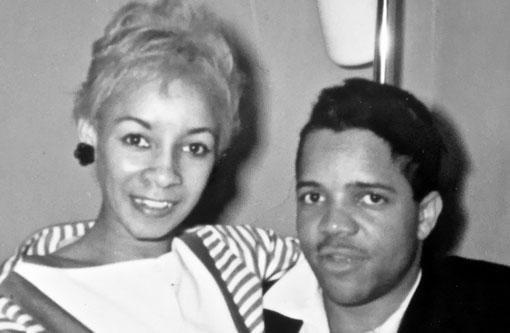 US news agencies are reporting the death on November 11th of music biz exec and sometime soul singer, RAYNOMA GORDY SINGLETON. (pictured above with her second husband, Berry Gordy) . She was 79 and died in California.

Raynoma was born in Detroit in March 1937. Her first husband was Charles Liles, an aspiring musician. They had one son, Cliff Liles who was to become a session bassist. In 1958 she and her sister auditioned for Berry Gordy. The young Motown boss wasn’t impressed but hired Raynoma as a writer, though he was to use her vocal talents when he formed the Rayber Voices – a team of studio session singers though they did release their own single in 1960 …. ‘Whirlwind’ b/w ‘I’m Gonna Cry’. Raynoma and Berry also formed a music producing and publishing firm, Rayber Music Writing Company. In 1960, the couple married; though they were to divorce in 1964. Later that year, though separated, Gordy put her in charge of his New York office but problems over bootleg records meant Raynoma left Motown.

In 1966 Raynoma married Eddie Singleton and with a loan from Berry Gordy, they set up a record label in Washington DC, Shrine Records. The label folded in 1968 and Raynoma came back to Motown where amongst her successes was launching the career of Rockwell.