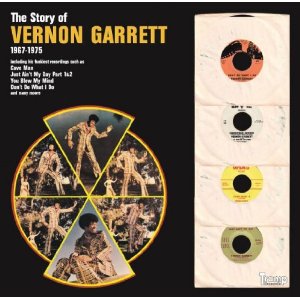 The German-based TRAMP label – the brainchild of Bavarian funk fanatic and DJ Tobias Kirmayer – is about to unleash several superb archival retrospectives. For fans of obscure ’70s soul then a 15-track CD devoted to the work of silky-voiced soul man VERNON GARRETT is a must-have. Entitled ‘The Story Of Vernon Garrett‘ it focuses on the Nebraska-born singer’s work between the years 1967 and 1975 and includes the rare 45 ‘We The People In the Ghetto’ which the singer recorded in 1970 with the Soul Messengers. Also featuring ‘You Blew My Mind’ and the incredible ‘Merry Christmas, Baby,’ it proves to be a stupendous cache of gritty, funked-up, soul.

Due out on September 10th is another terrific Tramp set: ‘The Story Of Roy Porter Sound Machine,‘ which examines the work of Colorado bebop jazz drummer ROY PORTER, who cut his musical teeth recording as a sideman for Charlie Porter on late-’40s sessions for Dial Records. Come the ’70s, Porter was leading an esoteric jazz-funk group whose music followed a similar stylistic trajectory to the one that vibes-man Roy Ayers was exploring during the same period. The new Tramp anthology looks at Porter’s ’70s underappreciated work and features the complete 1971 Bumps Blackwell-produced album, ‘Jessica,’ which was originally released on the miniscule Chelan label, as well as the rare 1975 LP, ‘Inner Feelings.’

On October 8th, Tramp releases a fascinating Various Artists compilation called ‘Ancestors Of Rap.’ Assembled by resourceful crate-digger Tobias Kirmayer, it explores the origin of African-American spoken-word-based music and traces the roots of hip-hop. There are sixteen tracks in all, most of them obscure, ranging from Pigmeat Markham and Gary Byrd to Blowfly and James Brown. This album and the above mentioned compilations are also available as limited edition vinyl pressings.

For more info go to: www.TRAMPRECORDS.com