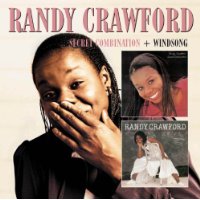 In association with Rhino, the UK’s Edsel label has just reissued a batch of albums focusing on the WEA catalogue of three eminent American ladies of soul.

In the 1980s, Georgia chanteuse, RANDY CRAWFORD, was very popular in the UK and was a frequent chart visitor. All of Randy’s WEA albums (ten in all) have been reissued as five 2-CD packages: her debut, 1976’s ‘Everything Must Change’ is paired with ’77’s ‘Miss Randy Crawford’; while ’79’s ‘Raw Silk’ is reissued in tandem with 1980’s ‘Now We May Begin’ (the latter included Randy’s big hit, ‘One Day I’ll Fly Away’). The singer’s most successful album, 1981’s Tommy LiPuma-helmed ‘Secret Combination’ can be found alongside ’82’s ‘Windsong.’ 83’s ‘Nightline’ is paired up with ’86’s ‘Abstract Emotions’ (which contained ‘Almaz’) and the singer’s final two albums for Warner Bros, ’89’s ‘Rich & Poor’ and ’92’s ‘Through The Eyes Of Love’ are brought together in a single package.

Southern soul siren, CANDI STATON, also gets the Edsel twofer treatment. The singer’s first two albums for Warner Bros, ‘Candi’ (1974) and ‘Young Hearts Run Free’ (1976) – its title track is a bona fide disco anthem – are paired for reissue, as are her next two albums for the label, ’77’s ‘Music Speaks Louder Than Words’ and ’78’s ‘House Of Love.’

Finally, soul, jazz and funk doyenne, PATRICE RUSHEN, who recorded for Elektra between 1978 and 1984 is served by two Edsel reissue packages. The California pianist/vocalist’s first three Elektra albums – 1978’s ‘Patrice,’ ’79’s ‘Pizzazz,’ and ’80’s ‘Posh’ –  can be found spread over a 2-CD set – while her biggest album, ’82’s ‘Straight From The Heart’ (featuring the hit ‘Forget Me Nots’) is paired with ’84’s ‘Now.’ Each deluxe reissue package features photos, lyrics and extensive new liner notes penned by Tony Rounce.

Look out for reviews soon of some of these titles at SJF.