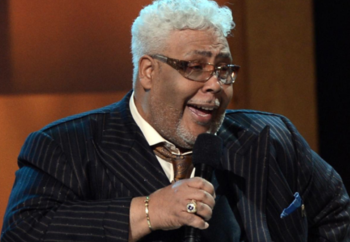 Gospel superstar, RANCE ALLEN died yesterday, Saturday 31st October. He was 71. In a joint statement with manager Toby Jackson, his wife of almost 50 years, Ellen posted: “While recovering from a medical procedure at Heartland ProMedica [in Sylvania, OH], Bishop Rance Allen passed away around 3 AM this morning.”

Allen has left a huge musical and spiritual legacy and  for good reason he is known as the “father of modern Gospel” – an accolade he earned for his work in popularising  the genre through his clever use of well-known soul songs and transposing them into a gospel setting  – as he did most successfully with the Temptation’s ‘Just My Imagination’ which became ‘Just My Salvation’.

Rance Allen was born in Monroe, Michigan in November 1948. One of 12 children, his strict grandparent soon had him singing and performing (he was a proficient pianist and guitarist) in church where he won himself the nickname “Little Rance, the boy preacher”. By his late teens he decided that his vocation was indeed inside the church and thus in 1969 he formed The Rance Alen Group with his brothers Tom (drums) and Steve (bass). At a Detroit talent show, they won themselves an audition with Stax and were signed to that label’s Gospel Truth imprint. There they enjoyed string of gospel and crossover hits including the aforementioned ‘Just My Salvation,’  ‘There’s Gonna Be a Showdown,’ (a gospel cover of the Archie Bell song) and ‘Ain’t No Need Of Crying’. Those hits and a slew of acclaimed albums won Rance Allen gospel superstar status. In his career he was nominated for five Grammys, sang at the White House and was eventually ordained a bishop and ministered at Toledo’s New Bethel Church Of God In Christ.

Throughout his ministry Allen continued to record and became one of the few gospel artists to have almost as many fans in the soul community… a reputation won though some mighty soul recordings like the gorgeous ‘Stay With Me’. More recently he recorded with Snoop Dogg

Fellow pastor Bishop Robert G. Rudolph Jr today posted, “Bishop Allen’s unique vocal ministry was an indispensable sound within the Church of God in Christ and Christendom. His gift transcended the boundaries of musical genre as he remained a sought-after personality called to perform on global venues.”

All of Allen’s Gospel Truth recordings have, this year, been reissued by Craft Recordings.