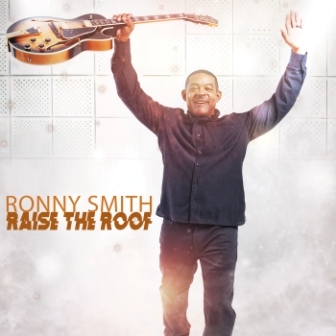 RONNY SMITH is a US jazz guitarist who’s CV includes work with artists as diverse as The Marvellettes, Melba Moore and jazz drummer Bobby Durham. As a soloist Ron has a number of albums under his belt but right now he’s excited to be releasing his debut collection for Skytown Records – ‘Raise The Roof’.

And that busy, bustling title track gives the flavour of what Mr S is all about and where he’s coming from. He’s a classic jazz guitar man – in the thrall of people like Wes Montgomery, Joe Pass, and George Benson. That’s to say his playing is always tight and melodic; intricate and deft, but always accessible and easy-on-the-ear.

Of that garlanded guitar trio, it’s perhaps Benson that Smith’s style is closest to. Hear the Benson-esque flourishes on tracks like ‘Brighter Day’, ‘Me Time’ and ‘On it’ while for different vibes try the big ‘Brazilian Dancer’ (the set’s obvious Latin cut), the loping and lazy ‘Cool Breeze’ or the slower groove that ‘Say Again’. Ronny doesn’t just do smooth though; you want funk? Then try the tough and bassy opener ‘Breaded Funk Well Done’ or the sparse cover of Bill Withers’ ‘Use Me’ That one is one of two covers on the album. The other is a faithful instrumental take on Leon Russell’s wistful ‘Superstar’ – a stately final track.

‘Raise The Roof’ is a consummate smooth jazz guitar album. Ronny’s people tell us that it might well have been called ‘The Ronny Smith Show’ – our man plays guitar, keys and bass throughout he also arranged, produced and programmed everything. Clever old Ron! Out now!