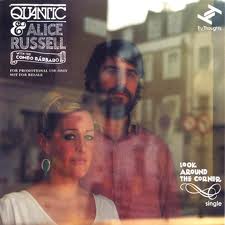 QUANTIC … WILL HOLLAND that is … has been making music for ten years under a number of various guises and he’s released a dozen albums. WILL has always been a record-obsessed crate digger and part of his passion is to find the roots of the music he loves. That passion has taken him all over the world but he currently resides in Cali, Colombia , working with musicians as diverse and vibrant as his own tastes.

His label – Tru Thoughts – is marking his ten years in the business with a double CD that offers what is loosely termed “his best”. Label boss and compiler, ROBERT LUIS was initially daunted by the task but across 32 cuts he’s confident that he’s selected the music that most accurately portrays QUANTIC’S sonic odyssey.

The album covers almost all of QUANTIC’S incarnations and features material from most of his main collaborators – like ALICE RUSSELL and SPANKY WILSON. Hard-to-define, the music’s diversity reflects the melting pot that was the sum of WILL’S influences.

THE BEST OF QUANTIC is released on TRU THOUGHTS on September 5th…. The album comes as a two CD set and in limited edition vinyl.