PUTTIN’ A LID ON IT! 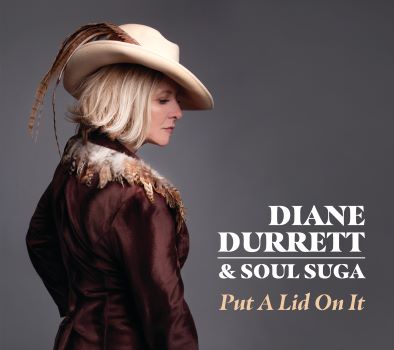 Last autumn veteran US singer DIANE DURRETT (aided an abetted by her fine band, SOUL SUGA) exhorted us to ‘Make America Groove’. I guess it was her riposte to a certain someone’s plea to Make America Great’ but Ms. D’s workout was eminently more pleasurable than a certain Mr T’s rants!

‘Make America Groove’ was a funky and feisty workout with a lyric that takes you all across the States (in the way that ‘Dancing In The Street’ did) . The idea, we were told, was to promote the wonderful, unifying power of music. Diane and her producer Thom TK Kidd were adamant that the song was not a nod to the oft used political slogan; rather a joyous celebration of the power of music… though they did cleverly work ‘The Star Spangled Banner’ into the lyric!

On release we were promised a full album and that LP, ‘Put A Lid On It’, is about to win release via Blooming Tunes music. The overall sound is a little more old school than the brash ‘Make America Groove’ with the Southern groove ‘We Got It’ being the soul standout. Though on the gentle opener, ‘In My Soul’ Ms D makes it clear where she’s coming from re. her soul influences. Elsewhere the title track echoes the brassy, bluesy sounds of Bobby Bland while ‘Wish It Would Rain’ (nothing to do with the Temptations’ classic) is a breathy, smoky, bar room meander. In places the music reminds me of early Joss Stone while on stuff like ‘Good News’ the reference is vintage Janis Joplin. If that strange cocktail floats you boat you can investigate from September 27th