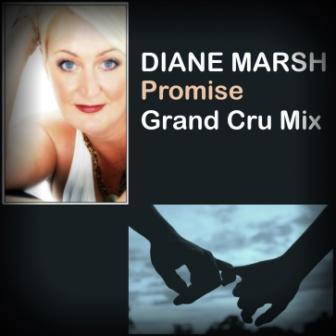 DIANE MARSH is a blue-eyed soul singer who works in and around the North West of England, and in a long career she’s worked with people like Odyssey, Kleeer, Jimmy James and the Vagabonds, Adina Howard and dear old Edwin Starr.

In her own right she won acclaim for her guest spot on the Cool Million album ‘Going Out Tonight’  which spawned the dance floor hits ‘Make Me Yours’ and ‘Closer’, that last one re-mixed by Tom Moluton, no less! Then in 2013 she wrote and produced the modern soul fave, ‘Hornyficational’ and remember, Diane’s ‘Don’t Give Up On Lovin” (produced by Andy Mad Hatter of Old English Records) is still in demand today.

And now right at the end of the year, Ms Marsh has delivered one of the catchiest UK singles of 2015… an easy-going finger clicker called ‘Promise’.

The song began life as a simple demo that was played on Solar Radio by Dennis O’Brien and after an on-air request for a re-mix, DSG Records stepped in and the result is ‘Promise’… the Grand Cru Mix.

The tune is already winning plays on the more discerning soul stations – including Jazz FM while dance floor reaction is positive. Little wonder, the cut’s a relaxed and catchy mid-tempo beater with its roots in classic 80s soul … it’s a real ear worm of a tune and Diane’s understated vocal is perfect for the sentiment.